Posted on October 8, 2013 by flanamullegan

It’s been almost five months since our beautiful wedding.  We have been enjoying using the great stuff that we found on our honeymoon.  Our subsequent road trips have been as far north as Burlington, Vermont; as far east as Sandwich, Mass.; as far south as Hillsville and Abingdon, Va., and as far west as Pine Top, Kentucky.

Accacia has been sewing and knitting a bunch — clothes for herself and lately lots of baby gifts as she & Grigg have six friends expecting babies between now and December.  If you are curious, you can see what she’s been up to at punsnneedles.wordpress.com.  Grigg has continued to modify the 8-quart ice cream maker, and has helped his father with Miss Sue, the 25-foot Hooper Island Draketail boat that the elder Grigg finished building about a year ago (it’s won two blue ribbons in the Mid-Atlantic Small Craft Festival. We bade farewell to his friend John’s 1953 GMC truck – Grigg installed new axles with large disc brakes and a Detroit Diesel 4-53T and transmission before it was hauled to Kansas City.  You can see more photos of what Grigg’s been up to here.

But our big project is our backyard studio – formerly the timberframe structure we were married in. We’ve been getting ready to have the frame moved to our house and will be documenting that project at this blog.  So far, we’ve started to prepare the ground for a foundation. 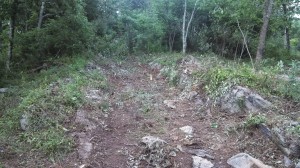 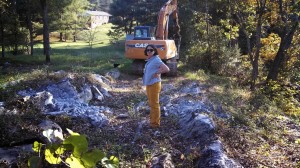 Accacia standing at the site of the studio. Willie is getting ready to run the excavator.

We're Accacia and Grigg Mullen III.
View all posts by flanamullegan →
This entry was posted in Uncategorized. Bookmark the permalink.